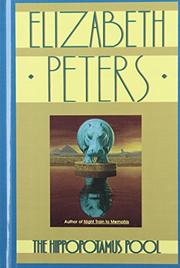 Once more into the ancient tombs of Egypt with staunch 19th-century archaeologists Amelia Peabody and Radcliffe Emerson (The Snake, the Crocodile and the Dog, 1992, etc.). With their powerful enemy Sethos disposed of, the Emersons--along with loquacious son Ramses and lovely young ward Nefret--are aboard their boat Amelia, moored on the Nile, as they prepare to explore the possible site of Queen Tetisheri's tomb in Thebes. The undertaking was prefaced by a strange encounter in a Luxor hotel with a mysterious stranger who talked of reincarnation, claimed to know the tomb's exact location, and died of poison in the middle of the meeting. His body vanished, to be found days later floating in the Nile. All of this the Emersons attribute to Signor Riccetti, kingpin of illicit trade in antiquities. Meanwhile, there are other evil forces to reckon with, like Abd el Hamed, a rival dealer, whose abused apprentice David, a grandson of Radcliffe's trusted helper Abdullah, comes under Amelia's wing and later proves his worth when Ramses is kidnapped. Nefret, too, is at risk, but with help from Radcliffe's brother Walter, his sensitive wife Evelyn, and Amelia's usual fearless and intuitive instinct, all ends well for everyone but the bad guys. Like many of the previous seven in this series, a wordy confusion of vile intentions, powerful enemies, dramatic rescues, excruciatingly detailed forays into the ancient past, and Amelia's cool. Fans of the latter may love it, but most readers will be numbed by the heavy-handed plotting.
Pub Date: April 10th, 1996
ISBN: 0-446-51833-6
Page count: 368pp
Review Posted Online: May 20th, 2010
Kirkus Reviews Issue: Feb. 15th, 1996

A RIVER IN THE SKY
by Elizabeth Peters
Fiction

THE LAUGHTER OF DEAD KINGS
by Elizabeth Peters
Fiction

TOMB OF THE GOLDEN BIRD
by Elizabeth Peters
Fiction

THE SERPENT ON THE CROWN
by Elizabeth Peters
Fiction

THE FALCON AT THE PORTAL
by Elizabeth Peters