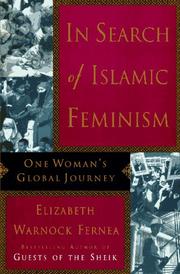 IN SEARCH OF ISLAMIC FEMINISM

 A remarkable, stereotype-shattering, gender-bending study of Middle Eastern women and their efforts to gain equality. Fernea (Middle Eastern Studies/Univ. of Texas) spent two years traveling to Uzbekistan, Morocco, Kuwait, Turkey, Egypt, Iraq, Saudi Arabia, and Israel asking these questions: Is feminism possible under Islam, a religion that at least on the surface seems to demand that women be subservient to men? And if so, how is Islamic feminism different from Western feminism? Fascinating questions, these. And Fernea (coauthor, The Arab World, 1985, etc.) does an admirable job of chronicling her attempts to answer them. A travelogue of sorts, the book yields some surprises. Chief among them to Western feminists--who almost universally believe feminism is impossible for women hidden behind facial veils--is this: Feminism in the Middle East is alive and well. In Morocco, for instance, at least 20 percent of the judges are women. Not only that, but much of the funding for a major women's research center has come from the government. Which is not to suggest that all is perfect. Women's place under sharia, or Islamic law, remains up for interpretation; Uzbekistani women still rely on abortions as their primary form of birth control. Conversational in tone, the book could have used a little more editing. (Do readers really need the menu for every meal Fernea ate on her voyages?) In her effort to be exacting and fair, Fernea also includes items that do little to advance her narrative. Why, for instance, include details about an interview that never takes place with Safinaz Kassam, an Egyptian literary and drama critic? Don't let the academic-sounding title deter you. This volume explodes the myth that feminism can't take root in lands where Islam rules.