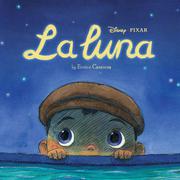 A Pixar film with an Academy Award nomination for Best Animated Short is transformed into a picture book with decidedly mixed results.

The textures and colors, blues, greens and golds, are simply beautiful, as the three characters, a boy, his hugely mustachioed father and his hugely bearded grandfather take their little boat, La Luna, out. The boy is going to work with the men for the very first time. The great moon rises from the sea, and the boy climbs a ladder to the moon, finding its surface covered in glittering stars. This family’s job is to clean up the moon, but his father says one way and his grandfather another. A huge star crashes into the moon, and while his father and grandfather argue about how to deal with it, the boy taps it. The star breaks into a plethora of tiny stars, and the three sweep them all up, “each in his own way.” The film, which won’t be seen until June, when it precedes Pixar’s Brave, is visible in 30-second clips online and is almost entirely wordless. (The book's text writer gets a tiny credit line, “Words by Kiki Thorpe.”) Its tender story about generations and carrying on the work, alas, does not quite come across with words on paper.

Rich and lovely to look at, but probably much more evocative as a memory of the animated short rather than a thing in itself. (Picture book. 5-9)

CARTWHEEL TO THE MOON
by Emanuel di Pasquale
Children

THE BOY WHO CLIMBED INTO THE MOON
by David Almond
Children