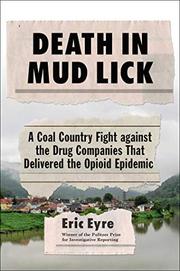 A Pulitzer Prize–winning investigative reporter delivers his entry in the (sadly) growing literature about the opioid epidemic ravaging the country.

As a reporter at the small-circulation Charleston Gazette-Mail in Charleston, West Virginia, Eyre won the Pulitzer for his writing on the huge shipments of opioids entering his region and how opioid manufacturers, wholesale distributors, and unethical doctors and pharmacists combined to put fatal doses of the dangerous painkillers into the hands of desperate patients. There have been numerous recent books about the opioid crisis—readers can’t go wrong with Sam Quinones’ Dreamland, Beth Macy’s Dopesick, or Chris McGreal’s American Overdose—and Eyre covers some of the same ground. However, what distinguishes his book is the author’s emphasis on the massive but nearly anonymous wholesale distributors Cardinal Health, AmerisourceBergen, and McKesson, among others. Those companies shipped millions of pills to small-town pharmacies that never could have needed such volumes; for instance Kermit, which has a population of less than 400 and was “drowning in prescription painkillers.” Eyre clearly explains how the Drug Enforcement Administration and the West Virginia Board of Pharmacy could have ameliorated the flood of pills but did nothing. Another powerful actor who enabled the epidemic was West Virginia’s attorney general, Patrick Morrisey, a Republican politician who lied about his involvement and failed to recuse himself while his wife received payment from Cardinal Health as a lobbyist. While battling for disclosures via freedom of information lawsuits in the courts, Eyre located numerous victims of the indiscriminate pill shipments, including many users who had buried multiple family members and friends after they overdosed. Unsurprisingly, his accounts of his interactions with them are disturbing, moving, and heart-wrenching. Portions of the narrative feature first-person narration, as the author illuminates how time-consuming, budget-busting investigative journalism functions despite circumstances that mitigate against it. The drama ratchets up as Eyre battles early-onset Parkinson’s disease.

Timely, depressing, engrossing reportage on an issue that can’t receive too much attention.