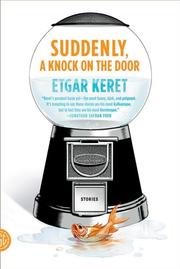 SUDDENLY, A KNOCK ON THE DOOR

Stories about storytelling from a young Israeli author.

With stories this short (many are a paragraph or two or a page or two, making the 22 pages of the penultimate “Surprise Party” feel like an epic), every word counts, so it’s quite possible that something has been lost in the translation (with no slight intended to the three translators credited, including noted author Nathan Englander). However these stories might read differently in Hebrew, and signify something different within a different cultural context, they function like fables and parables, fairy tales and jokes, with goldfish that grant wishes, parallel universes, an insurance agent who suffers (and then prospers) from his own lack of insurance, a woman who mourns her miscarriage with a creative-writing course (with her husband becoming jealous of the instructor and responding by writing his own revelatory stories). Bookending the collection are two stories featuring a writer as protagonist, a first-person narrator that the reader is invited to identify as the author, who is being forced to perform the act of writing for the benefit of others. The first, the title story, finds him coerced to create at gunpoint, conjuring a plot that proceeds to transpire within the story as he takes some pleasure from “creating something out of something.” The final story, “What Animal Are You?,” shows the self-conscious writer being filmed for a TV feature as he’s in the process of writing (or at least simulating it), wondering whether a hooker might seem more natural on camera as his wife than his wife does. His pieces elicit comparison to sources as diverse as Franz Kafka, Kurt Vonnegut and Woody Allen. He also recalls Lydia Davis in his compression and Donald Barthelme in his whimsy. Yet the stories are hit-and-miss, some of them slight or obvious, though the suggestion that “in the end, everyone gets the Hell or the Heaven he deserves” might be a fantasy that readers will wish were true.

More like bits and sketches than stories, from a writer who is often very funny and inventive, and occasionally profound.

THE GIRL ON THE FRIDGE
by Etgar Keret
Fiction

THE BUS DRIVER WHO WANTED TO BE GOD
by Etgar Keret

DINNER AT THE CENTER OF THE EARTH
by Nathan Englander
Fiction

THE MINISTRY OF SPECIAL CASES
by Nathan Englander
Fiction

FOR THE RELIEF OF UNBEARABLE URGES
by Nathan Englander

THE GIRL ON THE FRIDGE
by Etgar Keret
Fiction

LET IT BE MORNING
by Sayed Kashua
Fiction

THE LIAR
by Ayelet Gundar-Goshen
Fiction

WHAT TO DO ABOUT THE SOLOMONS
by Bethany Ball
Fiction

THE WORLDS WE THINK WE KNOW
by Dalia Rosenfeld
Indie

EVERYTHING IS ILLUMINATED
by Jonathan Safran Foer
Fiction