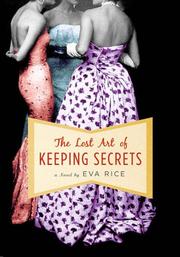 THE LOST ART OF KEEPING SECRETS

Rice’s (Butterfly Sting, 2002, etc.) British upper-crust milieu is similar to that of Julian Fellowes, but lightly and with none of the latter’s wit or critical edge. Her gentry, many of them “penniless toffs” in 1950s London, are a mix of bright young things and eccentrics with a taste for American glamour and popular music. Their dilemmas are conventionally of the heart; as for money worries, they never seem bad enough to forbid another bottle of champagne or something new by Dior. The narrator, naïve Penelope Wallace, 18 and obsessed with clothes and crooner Johnnie Ray, lives in the country, at monumental Milton Magna, an ancient pile that, owing to her family’s debts (her father was killed in the war), is falling into ruin. Swept up one day by charismatic Charlotte Ferris—“no one would ever be able to refuse her anything”—Penelope meets cousin Harry, a trainee magician with mismatched eyes, and kindly Aunt Clare, whose warmth is a welcome contrast to Penelope’s own mother, the beautiful but unhappy Talitha. Harry is in love with Marina, who is now engaged to George, so Harry asks Penelope to pretend to be his girlfriend, hoping to make Marina jealous. Penelope, being an old-fashioned young woman, dislikes the deception but goes along with it, then begins to feel she may no longer want to pretend. Marina and George break up, but only temporarily, and Harry disappears. Meanwhile, handsome American agent Rocky Dakota enters the picture, destined to fall in love with Talitha. He even discreetly torches Milton Magna for her when everyone, including the guinea pig, is out of the way. Harry reappears, loving Penelope, not Marina. Bright prospects all round.