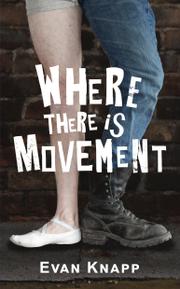 WHERE THERE IS MOVEMENT

A gay teen from a small Oregon town falls in love with dance and a self-destructive new-wave underground in this debut coming-of-age memoir set in the radical 1980s Portland arts scene.

Knapp was in seventh grade when his queerness and nonconformity transformed him from an “outgoing, popular, naive little limpet” into a constant target of bullies and jocks. Embracing his status, he found a home among “the thespians, the smokers, punks, mods, the Wave-os” and in the local ballet studio, where he could express his emerging self. His parents, a kindergarten teacher and a college music professor in the town of Corvallis, Oregon, were well-meaning people who had little idea of how to deal with their maverick son except to be carefully willing to let him distance himself from them. Recognizing this offer of freedom as a form of rejection, the author explored his emerging sexuality and his art, concealing his self-consciousness with “eyeliner and a lotta what-have-yous.” He eventually abandoned the security of his family home and ran to Portland, where he became part of the desperate and thrilling community of the “lost, those who’d evicted hope.” High on a cocktail of artistic camaraderie, sexual discovery, the “tangible magic” of dance, and the dangers of the emerging AIDS epidemic and homophobic violence, he turned experience into movement. Knapp’s prose is energetic, defiant, and roguishly cadenced, as he evokes the youthful state of being “teenager know-it-all strong,” driven by cacoethes, the urge toward the inadvisable. He is especially successful in conveying his transcendent love of the freedom of dance and his rebellion against the snooty strictures of conventional ballet’s efforts to turn him into a “Ken doll forklift.” The short, cacophonous narrative is satisfyingly taut up to the final pages, where it ends with a jarring abruptness just as it takes a dark turn into sexual violence.

While the ending feels rushed, this lively account of youth culture adroitly evokes its time.