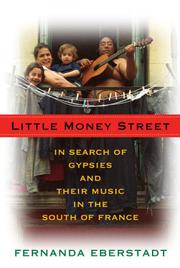 In Search of Gypsies and Their Music in the South of France
by Fernanda Eberstadt
BUY NOW FROM
AMAZON
BARNES & NOBLE
GET WEEKLY BOOK RECOMMENDATIONS:

Stark, sensitive study of modern gypsies, who are as vibrantly resilient yet tragically vulnerable within Europe’s welfare-powered gristmill of political indifference.

A novelist (The Furies, 2005) whose portrayals of Manhattanite culture mavens have evoked comparison to Tom Wolfe, Eberstadt spent several years living with her husband and two children on a vineyard in Roussillon, France, outlying the city of Perpignan. From this vantage, she pursues her fascination with gypsy music—à la the Catalonian Gypsy Kings, a “world music” genre sensation in the late ’90s—and an obsession to understand its roots. It’s a rewarding mission for venturesome readers; even American aficionados of gypsy song, dance and musicianship (principally Andalusian flamenco) rarely penetrate an aesthetic mystique that remains defiantly resistant to conformity. Accepted as a friend by a Perpignan gypsy couple (unwed) and their children, the author studiously builds a dossier of anecdotal insights on the perplexing and often sad contradictions of gypsy life. Regimentation of women, for example, can be extreme; gypsy men strive to marry virgins—often demanding proof as part of the ceremony—then many simply take a mistress, usually French, on the side while their wives are discouraged or intimidated from having any social life outside the home. On the other hand, Eberstadt observes, strict exclusion of women from rites among male relatives that now include shooting up drugs around the kitchen table with shared needles is probably what has kept AIDS from ravaging gypsy women and children to the extent it has in Africa. Gypsy kids, meanwhile, traditionally spoiled and doted on, face lives shortened by obesity and malnutrition as recipients of an irresistible—to their mothers—largesse of candy, soft drinks and junk food. Eberstadt’s sympathetic overview projects a gypsy future possibly as bleak as its obscure antiquity.

THE FURIES
by Fernanda Eberstadt
Fiction