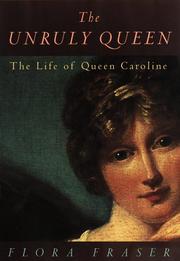  Lost in a morass of endless, unfocused detail lies the dramatic story of Caroline, the Princess of Wales, whose marital strife and mass popularity rival that of Princess Di. The life of Queen Caroline (17681821), filled as it was with private and public scandal, despair, and drama, is certainly a subject worthy of a modern biographer. Born a Brunswick princess, she was paired off with her cousin George, Prince of Wales, in 1795, in what was from the start an insufferable marriage. Not only were the two ill-matched (he was fastidious and claimed that she smelled), but George also brought with him the scandal of a possible previous marriage. Add to the mix George's sundry lovers and the punitive restrictions on his wife's personal freedom, and the marriage was doomed to spectacular conflict. Within weeks the two were living apart, although they managed to produce a child, Princess Charlotte. Caroline, portrayed by Fraser (Emma, Lady Hamilton, 1987) as more the spirited fighter than the submissive victim, creates her own world, one that includes numerous scandals, romantic liaisons, and continental travel. An amalgam of the three (extensive residence in Italy in the company of an Italian lover once in her service) finally brings about her undoing but also garners her public support. The current royal family's annus horibilis appears tame in comparison to the year 1820 in the life of Queen Caroline: She is tried for adultery and, though acquitted, is subsequently denied admission to the coronation of her husband, King George IV. She dies soon after. How could you go wrong with such material? Alas, Fraser snatches defeat from the jaws of victory. Vast masses of detail clutter a narrative that lacks a framework and focus. ClichÇs make tiresome reading even more disheartening. Still, for the reader willing to toil through the text, this offers a valuable perspective on the past and present drama of British royal families. (16 pages color photos, not seen)

THE WASHINGTONS
by Flora Fraser
Nonfiction