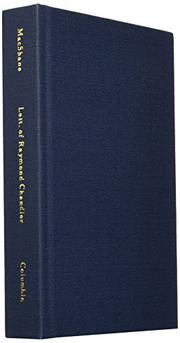 Chandler may not be, as biographer MacShane claims, "one of the greatest letter writers of his time"--and, with minimal annotations, this collection doesn't have the narrative thrust that some letter-assemblages do. But, for sheer opinionated vitality on books, writers, and the business of literature, Chandler's exuberant correspondence undeniably goes right to the head of the class. Not surprisingly, there are pages and pages here on the mystery novel: diatribes against the English detection novel in general ("a psychological fraud"), Sayer's Gaudy Night ("sycophantic drivel") and Christie's And Then There Were None ("bunk") in particular; qualified paeans to Hammett ("if you can show me twenty books written. . . 20 years back that have as much guts and life now, I'll eat them between slices of Edmund Wilson's head"); comments on the young Ross Macdonald's "pretentiousness"; high praise for Erie Stanley Gardner when writing to the author, the faint kind when writing elsewhere--along with disgust for Gardner's dainty lechery. ("The result has all the naughty charm. . . of an elderly pervert surprised while masturbating in a public toilet.") And there's plenty of Chandler on Chandler: self-deprecating, dissatisfied, yet also arrogant--especially in a fascinating letter (not mailed) to Alfred Hitchcock, who wanted more Hitch and less Chandler in the Strangers on a Train screenplay. Less expected, however, are Chandler's classically-schooled, anti-intellectual attacks on the whole range of the arts: James Cain ("Everything he touches smells like a billygoat"); Hemingway (who "got to be pretty damn tiresome. . . with his eternal sleeping bag"); Memoirs of Hecate County ("without passion, like a phallus made of dough"); O'Neill's "second or third-rate talent"; A Streetcar Named Desire ("Zero in art"); Elizabeth Bowen's "entirely unreadable" latest book; etc.--with, as Chandler himself signs a 1954 letter, "malice towards all," but also with genuine vigor and curiosity. And, in letters to (or about) publishers Alfred Knopf and Hamish Hamilton, there's the entire world of the writer's nitty-gritty: agents, paperback sales, the slick magazines vs. the pulps, book clubs, translations, subsidiary rights, money, money, money. Only in the last latters--about wife Cissie's decline and his own mental collapse--does anti-Semitic, anti-Catholic Chandler become a sympathetic figure. But, like him or not, agree with him or not, this was a book-man heart and soul--and these zestful, often quite elegant letters will take their place wherever tough, un-hyped talk of the literary life remains a passion.
Pub Date: Oct. 15th, 1981
ISBN: 0231050801
Page count: 532pp
Publisher: Columbia Univ.
Review Posted Online: March 23rd, 2012
Kirkus Reviews Issue: Oct. 1st, 1981

THE WORLD OF RAYMOND CHANDLER
by Barry Day
Nonfiction