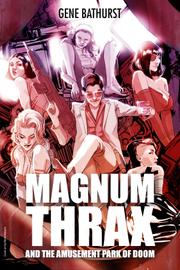 MAGNUM THRAX AND THE AMUSEMENT PARK OF DOOM

In Bathurst’s sci-fi debut, a group of humans and androids vows to stop an out-of-control amusement park from engulfing a post-apocalyptic world.

In a dystopian future, Magnum Heironymus Thrax is one of the warriors who defend the Pleasurepit Five, a former pornography emporium that now houses a colony of residents. He leads a team of “sexbots” that have been reconfigured for combat. After defeating a massive land squid, Thrax is ecstatic to find a valuable power-suit in the creature’s belly. However, a man’s still inside the suit; he warns Thrax of the threat of “the Engines of Creation” before injecting something into Thrax’s arm. It turns out that an entity known as the Dark Lord is behind the Engines, which could consume the entire world; at their heart is a defunct amusement park from the mid-25th century. The injection that Thrax receives contains a “synvirus” that he can use to infect and destroy the Dark Lord, but if it’s not done within seven days, the virus will dissolve Thrax instead. His mission also entails rescuing Mindy, a young woman, from a monastery; the Dark Lord seems to have targeted her specifically, for reasons unknown. Thrax’s ragtag team consists of Jez and Candy, among other sexbots; his human programmer friend, Kal Ecto Grammer; and Ghatz, a lower-ranking Pleasurepit Guardian. Unfortunately, getting to the monastery requires passing through the Death Zone, which is populated by a variety of menaces, including “nanozombies” and “mummizombies.” Thrax can’t even trust his companions, as one of the team members has plans to betray everyone to the Dark Lord.

Bathurst’s novel initially seems to be merely a showcase for raunchy jokes, particularly as several characters are androids designed for sexual gratification. But the sexbots also have well-developed personalities: Jez, for instance, is a dominatrix model who’s often confrontational, while sensitive Candy expresses a desire to have a child. The story also takes jabs at consumerism, as corporations remain even after the apocalypse; Nike owns the monastery where the team is headed, and the amusement park’s creator was the Google Corporate Republic. Perhaps the best riff on this topic is Thrax’s newfound obsession with Cocainola, a soda that he persistently craves and praises, just as present-day consumers express their love for trite products. Of course, there’s also a good deal of overt, exaggerated comedy: although the frequent sex is never explicit, the violence is gleefully over-the-top, with some character deaths resulting in chunky bits. The abundance of dialogue incorporates contemporary slang, from the occasional “duh” to “bullshit”—apparently Thrax’s favorite word. Nevertheless, Bathurst’s descriptions contain scintillating imagery: “Traceries of electricity arced through the black churning murk far above, unleashing lightning bolts which struck all around the limo, turning ash to glass and scorching the limo’s shell.” The author also playfully alludes to other works; for instance, Thrax has a small, metal dodecahedron that many want, recalling the One Ring in J.R.R. Tolkien’s works.