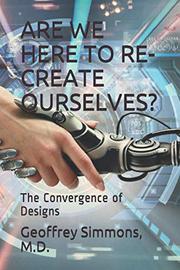 ARE WE HERE TO RE-CREATE OURSELVES?

This thought experiment–turned-manifesto delves into the possibilities of intelligent-design theory.

Simmons (To Glue or Not To Glue, 2009, etc.) brings his multifaceted interests and his background as a medical doctor to this sweeping discussion of macroevolution and intelligent-design theory. The ambitious scale of the book belies its relatively straightforward purpose: to make a case for intelligent design through examples of intricate complexity in nature and humans’ own innate interest in re-creating versions of themselves—from dolls to robots to clones. He discusses a wide range of topics, including the water cycle and the history of corrective lenses, to offer evidence of what he sees as the unlikelihood of evolutionary development. Along the way, the author uses colloquial language, such as “scare the bejesus out of us,” to create moments of humor in an otherwise sober manifesto. Some chapters provide intriguing intersections of ideas—for example, in one, he argues that the sense of hearing is so diverse and complex in nature that it must have been made by design, while also noting that we, as humans, have the capacity to create robots that can hear. The most enthralling sections, though, focus on the wonder and complexity of life on Earth; at times, the author’s refrain about intelligent design fades into the background as his sheer fascination regarding life’s breadth, and the intricacy of such processes as locomotion, takes center stage. The book also offers thought-provoking quotes between chapters from famous and nonfamous people, which adds to the meditative tone of some discussions, and a substantial portion of the text is dedicated to the concept of self-awareness and the question of how nonhuman life thinks. The conclusion offers an insightful look forward.

A wide-ranging and often engaging discussion of the workings of the observable, living world.