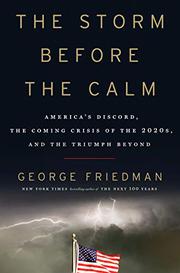 THE STORM BEFORE THE CALM

America's Discord, the Coming Crisis of the 2020s, and the Triumph Beyond
by George Friedman
BUY NOW FROM
AMAZON
BARNES & NOBLE
LOCAL BOOKSELLER
GET WEEKLY BOOK RECOMMENDATIONS:

The Austin-based forecaster argues that “impersonal forces” will drive events in the 2020s, “one of the more difficult periods” in American history, but prosperity will follow.

Friedman (Flashpoints: The Emerging Crisis in Europe, 2015, etc.), an adviser to corporations and government and the founder of Geopolitical Futures, has a cyclical view of American history, which argues that predictable cycles of “crises, order, and reinvention” have shaped outcomes since the birth of the nation. We are “simply passengers on the American roller coaster,” he writes matter-of-factly. Two major cycles control “actors and events”: an institutional cycle occurring every 80 years (marked in the past by the Revolutionary War, the Civil War, and World War II) and guiding the relationship between the federal government and other parts of the nation; and a socio-economic cycle, which changes the dynamic of the U.S. economy and society at 50-year intervals and has produced the industrial class, baby boomers, and the middle class. Friedman predicts these complex forces will converge in the 2020s to “destabilize” American life and begin a “period of failures” marked by indifference to politics, low growth in productivity, and increasing unemployment. The 2030s will be a murkily described “period of creation” that will “redefine” the social landscape and ameliorate the problem of dysfunctional federal government by introducing military governing principles (subordinates do not deviate from the commander’s intent). Many readers will balk at the author’s too-neat cycles and the notion that leaders do not play a major role in shaping events. In support of his theorizing, he offers a sharp analysis of American life, especially the roots of the knack for reinvention that allows the nation to start over after crises. Americans invented their country, he writes, and lacking shared history and culture, “invented themselves.” Friedman also discusses the nation’s reluctance to accept its responsibilities as the “sole world power” and the tensions between its technocratic and industrial working classes.

A provocative, idea-filled burst of prognostication.

THE NEXT 100 YEARS
by George Friedman
Nonfiction

THE FUTURE OF WAR
by George Friedman
Nonfiction

THE COMING WAR WITH JAPAN
by George Friedman
Newsletter sign-up