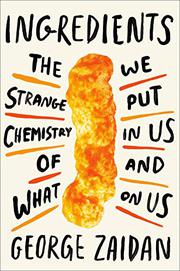 The Strange Chemistry of What We Put in Us and on Us
by George Zaidan
BUY NOW FROM
AMAZON
BARNES & NOBLE
LOCAL BOOKSELLER
GET WEEKLY BOOK RECOMMENDATIONS:

Answers to questions about what is in the stuff we eat, drink, inhale, smear on our bodies, or immerse ourselves in.

Zaidan, an MIT–trained chemist and former TV co-host (CNBC’s Make Me a Millionaire Inventor) who is currently an executive producer at the American Chemical Society, talks directly to readers in earthy, conversational, sometimes overly cute language that will appeal to some readers and turn others off. Following each chapter’s catchy title—e.g., “What’s That Public Pool Smell Made Of?”—is an explanatory sentence clearly designed to pique readers’ interest. For example, in the chapter titled “Processed Food Is Bad for You, Right?” the author begins, “this chapter is about ingredient labels, diabetes, uninhabited islands, porn, and homemade Cheetos.” Or consider “Plants Are Trying To Kill You,” which opens with, “this chapter is about carbon dioxide, pooping, plumbing, the Energizer Bunny, grenades, condoms, poisonous potatoes, and NASA ice cream.” Readers who accept Zaidan’s chosen mode of communication will be motivated to continue and will learn about a variety of relevant issues, including the promotion of products, the misinformation contained in headlines about food and health, flaws in scientific testing, and how to interpret statistics. Throughout, the author sprinkles black-and-white drawings illustrating chemical reactions, some verbal equations, and his own interpretations of research findings and flaws. For those looking for advice, the last chapter contains a few ordinary tips: Don’t worry about sensationalized health and food news stories, don’t smoke, be physically active, and stick to a healthy diet. In the appendix, Zaidan’s tone changes, as he describes a study undertaken at San Francisco General Medical Center in which coronary care patients were split into two groups: The members of one group were prayed for by born-again Christians while the other group received no prayers. Here, the author provides a restrained, thoughtful, and eye-opening analysis of the findings and their possible interpretations.

There is good information to be found in this book; just look past Zaidan’s heavy-handed efforts to be accessibly amusing.