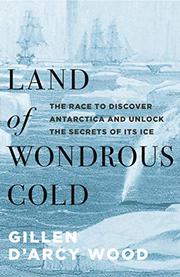 The Race To Discover Antarctica and Unlock the Secrets of Its Ice
by Gillen D’Arcy Wood
BUY NOW FROM
AMAZON
GET WEEKLY BOOK RECOMMENDATIONS:

Three nations sent expeditions to the Antarctic in the late 1830s and early 1840s. This fascinating account describes their members’ heroism and often disastrous experiences without ignoring the significant discoveries that followed.

Wood (Environmental Humanities/Univ. of Illinois; Tambora: The Eruption That Changed the World, 2014) writes that by the early decades of the 19th century, whalers, sealers, and explorers had penetrated deep into the icepack and touched dry ground. Geographers suspected there was more, and the spirit of discovery, national rivalry, and the persistent fantasy that a rich, temperate land lay near the pole encouraged further voyages into the planet’s last great uncharted territory. In France and England, two experienced explorers—Jules Dumont d’Urville and James Ross—commanded their nation’s expeditions. The American ships, so long delayed and poorly organized that its senior officers refused to serve, sailed under junior officer Lt. Charles Wilkes, whose dysfunctional command style produced almost universal hatred from his men, who were “focused on what they perceived as his despicable stratagems to hog the glory of polar discovery for himself.” Wood delivers riveting accounts of the voyages, which, hobbled by primitive technology and wooden sailing vessels, featured immense courage, suffering, loss of life, and shipwreck but produced important advances. “The first race to the pole resulted in a split decision,” writes the author. “The French were the first to sight Antarctica and make landing, while the Americans charted the greatest section of coast and established its continental dimensions. The British, meanwhile, who were the last on the scene, traveled the furthest and saw the most.” Mixed with these adventures, Wood provides a rich history of Antarctica, which was a lush, temperate land before it froze 50 million years ago, and a portrait of the continent today, whose mysteries are now less geographic than meteorological. If its ice (90% of the world’s) melts, oceans would rise more than 200 feet, and this might be now in progress.