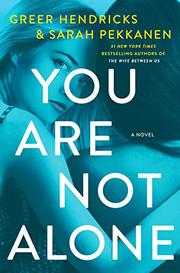 YOU ARE NOT ALONE

Witnessing a suicide proves almost fatal for the witness herself.

Shay Miller would not have been on that subway platform had she not taken the 22 seconds required to tie up her ponytail. Because she did, she is the sole witness to a suicide that changes her life. But is she stalking the friends of the dead girl, or are they stalking her? It seems to be both, as Hendricks and Pekkanen (An Anonymous Girl, 2019) unfold another one of their intricately plotted, female-focused thrillers. Rage about rape and sexual abuse underlies the plot as Google searches, dating apps, and hacked phones move it forward, making this a thriller of the moment. Here, the evil men are on the sidelines—the women are pitted against each other in a complicated game of cat and mouse. Shay, who is lonely, insecure, and broke, is easily drawn in by the cool and confident Moore sisters, who ply her with beauty makeovers, a “sea-blue leather purse,” “a sugar cookie scented Nest candle, with notes of Tahitian vanilla and bourbon infused caramel,” and, most devastatingly, the illusion of friendship. But socially awkward, highly observant Shay, who makes her way through life by recording statistics and factoids about human nature in a “Data Book,” can only be fooled so long. “Between 73 and 79 percent of homicides during a 15-year period were committed by offenders known to the victim,” she notes. Good thing to know. The authors dole out clues in a series of interlocking flashbacks; finally we get the detail that makes the pieces come together, with just a few little issues to argue about in your book club.

Lots of frenzied flipping back and forth for readers who like to figure out the puzzle.

THE WIFE BETWEEN US
by Greer Hendricks

THE WIFE BETWEEN US
by Greer Hendricks
Fiction

THE BEST OF US
by Sarah Pekkanen
Newsletter sign-up