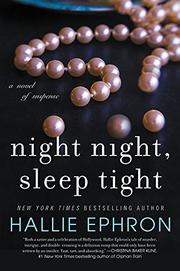 A 1963 celebrity murder has a violent aftermath as its secrets bubble to the surface decades later.

"It has everything. Old Hollywood, glamour, sex, intrigue and violence." Two of Ephron's (There Was an Old Woman, 2013, etc.) characters are talking about a memoir a third has written, but they could just as well be describing the book in which they all appear, a mystery with those same ingredients. When Deirdre Unger finds her father, Hollywood screenwriter Arthur Unger, dead in his swimming pool, she initially has trouble believing there was foul play. Soon, however, she's the prime suspect, and family members and friends are behaving as if they have something to hide. Somehow, it all relates to the night 22 years earlier when both a murder and a car accident changed Deirdre's life. That night, Deirdre was sleeping over at her best friend Joelen Nichol's house. After a raucous adult party at which the Unger parents were guests, Joelen ended up stabbing to death her movie star mother's abusive boyfriend. Deirdre can't remember much about that night—there’s a gap in her memory between that night and the day she woke up in the hospital, permanently crippled in a wreck that occurred when her father drove her home. Ephron—like her sisters Nora, Delia and Amy—grew up in Beverly Hills with screenwriter parents who had a troubled marriage. That autobiographical basis gives this novel emotional authenticity and scenic clarity. Furthermore, as Ephron explains in an afterword, the house where Lana Turner's daughter murdered her mother's boyfriend in 1958 was just blocks from the Ephron home, and the girl was just a few years older than she.

CAREFUL WHAT YOU WISH FOR
by Hallie Ephron
Fiction

THERE WAS AN OLD WOMAN
by Hallie Ephron
Fiction

COME AND FIND ME
by Hallie Ephron
Fiction

WHAT REMAINS OF ME
by Alison Gaylin
Fiction

THERE WAS AN OLD WOMAN
by Hallie Ephron
Fiction

COME AND FIND ME
by Hallie Ephron
Fiction

EAR TO THE GROUND
by Paul Kolsby
Fiction