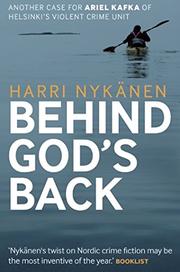 A Helsinki businessman apparently murdered by the most awkward suspect possible launches Detective Ariel Kafka, of the Violent Crimes Unit, on his second case (Nights of Awe, 2012).

Helsinki’s Jewish community is small enough that everyone knows everyone else. Its community of police officers is even smaller. So you’d think that Kafka, a member of both of these exclusive sets, would know the uniformed cop who gunned down office-supply–chain owner Samuel Jacobson just outside his swanky home. For better or worse, though, evidence soon points away from the police to an imposter, presumably someone hired by Leo Meir, of Cemicon Ltd., who’s been under 24-hour surveillance ever since he came to town, reportedly to arrange “a high-profile assassination.” So Kafka’s left to make inquiries among Jacobson’s circles, who correspond roughly to Kafka’s own friends and relatives. Kafka used to date Jacobson’s daughter Lea. His brother Eli is a corporate attorney deeply involved in Jacobson’s affairs. So is Eli’s law partner, Max Oxbaum, who’s Kafka’s second cousin. The few suspects who aren’t related to Kafka directly all have close ties to Israel, from Benjamin Haranin, the suspected money launderer who owns Baltic Invest, to Amos Jakov, long suspected of being his silent partner, to Haim Levi, the exchange student who spent a term living with the Jacobsons years before being named Israel’s Minister of Justice. Now Kafka, whom the dead man long since dismissed as son-in-law material, wonders if he can rise to the occasion by avenging Jacobson’s death.

Perhaps the oddest Scandinavian mystery to have crossed the ocean yet, a mixture of Jo Nesbø’s portraits of Nordic political corruption with Jerome Charyn’s waggish Borscht Belt tales of Isaac Sidel, the Pink Commish of New York.

THEY KNOW NOT WHAT THEY DO
by Jussi Valtonen