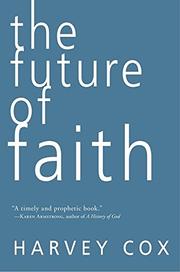 THE FUTURE OF FAITH

Celebrated religious scholar Cox (Divinity/Harvard Univ.; When Jesus Came to Harvard: Making Moral Choices Today, 2004, etc.) argues that we are witnessing the dawn of a third epoch in Christian history.

First came the Age of Faith, a time of emphasis on the message of Jesus, lasting from his crucifixion to Constantine’s decision to make Christianity the religion of the Roman Empire. Next came the Age of Belief, a long period marked by theological hegemonies and emphasis on creeds and theological points of view. Only in recent decades has this longstanding era begun to crumble against the insurgent Age of the Spirit, which is in many ways like the original Age of Faith. Cox examines the present death knells of two movements he describes as detrimental to people of faith: hierarchical theology, embodied mainly by the Catholic Church, and fundamentalism. These two movements, argues the author, stymie both faith and the true message of Jesus. Cox describes creed-making as a “toxin”; his disdain for orthodox theology is unmasked. As for the people, Cox attempts to show empathy toward Catholics, fundamentalists and even his own mid-20th-century divinity-school professors. This empathy, however, comes across as patronizing and condescending, opening him up to the “ivory tower” stereotype. Cox’s work is intriguing, and there is certainly truth in his observations about global Christianity and the rise of Pentecostalism and liberation theology. The author is also an entertaining writer who has known seemingly every major religious figure in recent history, including three popes and figures ranging from Jerry Falwell to Gustavo Gutiérrez. However, his black-and-white characterizations of wide-ranging movements leave his arguments wide open for attack.

A panoramic view through myopic eyes.

FIRE FROM HEAVEN
by Harvey Cox

The Hijacking of Jesus
by Leland Weber Miles
Indie

HAD ENOUGH OF GOD YET?
by Richard C. Johnson
Newsletter sign-up