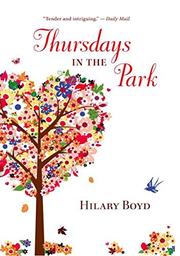 THURSDAYS IN THE PARK

A sincere tale of late-in-life love. The book, first published in 2011, was a best-seller in the U.K.

The year Jeanie turns 60 marks a decade since her reliable but controlling husband, George, started sleeping in a separate room and refused to tell her why. Adrift in a marriage that is now more comfortable routine than partnership, she focuses instead on the health foods store she owns, outings with her frank friend Rita and play dates with her granddaughter Ellie, whom she takes to the park on Thursdays. It’s there that Jeanie and Ellie meet Ray and his grandson Dylan. While the kids play, the adults feel an immediate connection, unlike what Jeanie has felt before. Soon, they are sharing life stories—each including the heartbreaking loss of a loved one—and enjoying a clandestine, burgeoning romance. When her husband decides, against Jeanie’s firm protestations, that they will move to a house in the country and that she should retire and sell her store, the choice, to readers, will seem obvious. But how can Jeanie end 32 years of mostly happy marriage? Who would care for George? And though her daughter, Chanty, is no more supportive of Jeanie’s desire to keep living and working in the city, Jeanie is loath to disrupt Chanty’s (and Ellie’s) life with such a thing as divorce. Even Rita, who initially encourages a full-fledged affair, citing the improvement in Jeanie’s life since meeting Ray, cautions her against abandoning a stable marriage. When none of these prove reason enough to ignore potential happiness with Ray, a revelation takes the decision out of Jeanie’s hands, at least for a while. A subplot involving Chanty and her surly artist husband is the least subtle of the obstacles facing Jeanie and Ray, but it adds good dramatic spice and satisfyingly prolongs the outcome. Boyd’s delicate rendering of Jeanie’s interior grounds the novel, and readers will root for her to finally get her own.

A poignant love story featuring refreshing characters in their 60s.

THE LAST LETTER FROM YOUR LOVER
by Jojo Moyes
Nonfiction