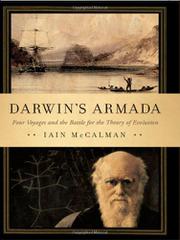 Four Voyages and the Battle for the Theory of Evolution
by Iain McCalman
BUY NOW FROM
AMAZON
BARNES & NOBLE
LOCAL BOOKSELLER
GET WEEKLY BOOK RECOMMENDATIONS:

Sparkling group portrait of the intrepid naturalists who challenged accepted notions about the creation of life and transformed science in the process.

Darwin’s first book, The Voyage of the Beagle (1839), inspired the other three aspiring young scientists to follow in his footsteps. Joseph Dalton Hooker, Thomas Henry Huxley and Alfred Russel Wallace traveled to the South Seas and explored the hinterlands of Asia, Australia and Africa, braving arduous voyages, shipwrecks and tropical disease to gain access to “the richest natural laboratories on the globe.” McCalman (Humanities/Univ. of Sydney; The Last Alchemist: Count Cagliostro, Master of Magic in the Age of Reason, 2004, etc.) interweaves a vivid account of their early travels with a lucid depiction of the world-shaping collaboration—the metaphorical “Armada” of the title—that enabled the quartet to successfully take on the class-ridden scientific establishment of its day. Darwin, dubbed “the Admiral” by McCalman, was their unquestioned leader, but the three “captains” in his metaphorical fleet contributed significantly to the theory of natural selection by explaining apparent anomalies in the way that species in neighboring regions diverged. Each collected extensive samples of plant life, insects and animals during his travels. Preserved and sent back to England, these specimens ultimately provided documented evidence of the variation and similarities among species, narrowing down the number of accepted species (a hotly disputed issue at the time). This allowed them to show how variations within each new generation of a given species can lay the basis for the emergence of new species—existing species branch out from a common ancestor as they adapt to new niche environments—providing a crucial element in understanding how natural selection works. Working as a team, Darwin, Hooker, Huxley and Wallace revealed for all to see the “origin, distribution and diversity of life on the planet.”

An extraordinary true-adventure story, complete with trials, tribulations and moments of exultation.

THE REEF
by Iain McCalman
Nonfiction

THE LAST ALCHEMIST
by Iain McCalman

THE STORY OF LIFE IN 25 FOSSILS
by Donald R. Prothero
Nonfiction