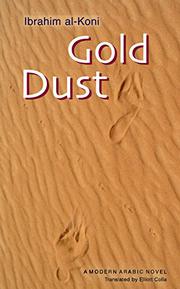 Pensive tale of the many things that can go wrong in a supposedly simple life.

The gold dust of Libyan novelist al-Koni’s title is just one of the disruptive temptations that confront Ukhayyad, who, like the protagonist of the author’s novel The Bleeding of the Stone (2001), lives in mountainous country deep within the Sahara. As the slender story opens, Ukhayyad is proudly boasting of the piebald Mahri camel that a tribal leader has bestowed upon him. (As the translator notes in an illuminating afterword, “the novel assumes that readers will readily recognize a difference of character between purebred and regular mounts.”) Ukhayyad has reason to be proud of his prize ride, but too much pride leads to disaster. It doesn’t help that the sheikh crows, “Whoever owns a Mahri like this piebald will never complain for want of noble values. You’ve honored our homes, O noble youth descended from noble men!” Sure of himself, Ukhayyad is stunned when the poor camel comes down with a bad case of mange, the cure for which involves his striking out into the remotest stretches of the desert in search of silphium, a fennellike curative plant long since extinct except in one faraway valley. The camel suffers, but then so does Ukhayyad; he finds a bride, but the bride he chooses earns him his father’s disownment, and when it turns out that he has a powerful rival, he has a fight on his hands. The storied piebald camel, meanwhile, looks more and more pathetic. Worse things still will befall him, as they will to Ukhayyad, a blood curse on his head. Al-Koni’s story, simply and elegantly told, has all the inevitability of a Greek tragedy—or, better, all the tribulations of Job, though without the redemptive reward—in a narrative punctuated by hints of pre-Islamic belief mixed in with Quranic admonitions: “Didn’t Sheikh Musa say that it was woman who drove Adam from the garden of paradise?”

If Franz Kafka had lived in the Sahara, this is a story he might have told, bleak but memorable.