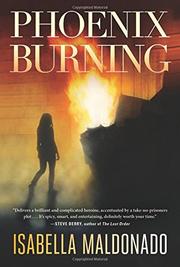 An ex-narc leads a war against a powerful crime family.

Veranda Cruise is supposed to meet an informant in her hunt against the Villalobos drug cartel. But after the informant goes up in flames and the hit man who killed him escapes, she’s left with nothing except her hatred of the clan that’s tried to destroy her family. After spending more than two years investigating the cartel, along with its biggest rival, Veranda was recently ousted from Phoenix’s Drug Enforcement Bureau and, after her name was cleared, transferred to Homicide only six weeks ago. So she’s very surprised when she’s appointed the lead detective in a multiagency task force called Operation Scorpion Sting. It’s a great honor, but it also means that if she fails, she’ll take several people down with her—and she’ll be even more of a target of the Villalobos clan than she already is. Adolfo Villalobos, the heir apparent of the crime family, must also prove himself worthy. Knowing that his ruthless father, El Lobo, has as much reason to hate Veranda as she does him, Adolfo has hired a computer hacker who helps him track Veranda’s every move, especially her bold plan to shut down both the Villalobos operation and the rival cartel. Scorpion partially succeeds by putting the other crime family out of business, but El Lobo and all his operatives elude them. The Villalobos cartel now rules Phoenix, and it’s all on Veranda. Her supervisors keep her in place, but before she has a chance to form a new plan—and after many, many pages of flashbacks and back story—she comes face to face with El Lobo’s chief enforcer and a brilliant plan to discredit her. It nearly succeeds, except for help from an unexpected source and Veranda’s own determination to show what she’s really made of.

Although this second outing relies too heavily on its predecessor (Blood’s Echo, 2017) and Maldonado spends too much time setting up its plot, the payoff, when it finally comes, is satisfying.

THE LIES WE TELL
by Theresa Schwegel
Mystery