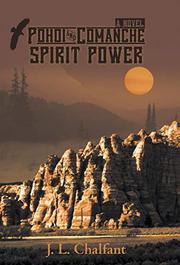 A Comanche teenager violates tradition in order to save her mother and her people in this debut YA novel.

West Texas, 1860. The looming Civil War has intensified the bad relations between Native Americans and their Texas neighbors—and revived the tribes’ hopes of driving the whites from the land once and for all. Fifteen-year-old Pohoi, the daughter of a Comanche father and a white mother, is curious about the Spirit Power sacred to her people, the Kwahadi Comanche of the Llano Estacado. Her medicine woman aunt, Hunts Medicine, warns her that Pohoi’s desire—or that of any young woman—to seek the power is taboo. The precocious Pohoi, who is already seeing visions, is prepared to buck tradition. Then tragedy strikes: A group of Texans murders Pohoi’s father and abducts her mother. When the warriors of her tribe appear reluctant to rescue her mother, Pohoi, filled with a desire for vengeance, takes up the task herself. She uses the Comanche Spirit Power to transform into a Ghost Warrior of legend and heads off to rescue her mother from the men who stole her. She is led by the ghost of her father, assisted by her friend—and crush—Yellow Bear, and accompanied by Little Rattler, a Mexican captured in a raid who is the son of her aunt. She will have to move quickly, as her visions seem to predict the destruction not just of her family, but her entire people as well. Chalfant’s detailed prose is well tailored to her protagonist’s rhythms and worldview: “As she ran, she heard chattering voices begin to echo throughout the village. Dogs yapped amid the sudden burst of the warriors’ excited shouts inside the council lodge while Pohoi relished the comforting sound of mothers, no longer fearful of the thunder, cooing to their crying babies.” The tensions between the characters and their relationships to their own roles within Comanche society make for some intriguing drama, though the story takes a while to get going. But the immersive setting and Pohoi’s plucky personality do much to sell the novel, and readers will be more or less content to follow her wherever the Spirit Power leads.

A rewarding, if conservatively paced, coming-of-age tale set on the Texas plains.