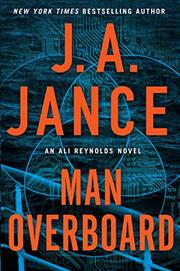 A shipboard tragedy is prologue to a deadly cyberduel.

Roger McGeary enjoys being a hero. Having transformed himself from a perpetual outsider, computer geek, and inmate of a mental hospital to the computer genius who prevented a massive data breach, he’s now basking in four-star service during the luxury cruise that’s been his reward. It doesn’t matter that he can barely tie a bow tie when he has a butler to do it for him. The butler is the first to realize that sometime after a dress ball, Roger jumped or fell off the ship. Investigators call it death by misadventure, but his aunt—the one relative he has left—isn’t convinced. Seeking help in proving Roger was murdered, she approaches High Noon Enterprises, an Arizona-based cybersecurity business, because Roger’s one friend from high school, Stuart Ramey—another lonely misfit who found his true calling in computer wizardry—is the behind-the-scenes star of High Noon. Stu’s sympathetic employers, B. Simpson and Ali Reynolds, agree to help him and his friend's aunt by taking the case. They don’t know that Owen Hansen, a recluse who’s been obsessed with suicide ever since his father killed himself, is using a psychotherapist’s hacked patient data to target others whose parents took their own lives. Calling himself Odin and relying on his consort, an intricate networked AI system he’s dubbed Frigg, Owen’s already started tormenting his next victim. But he reckons without the combined expertise of High Noon, especially the determined Stu, in a stop-and-start tale of high tech, complex psychological case histories, and the occasional diversion into Ali’s hiring issues with her domestic help.

Jance (Random Acts, 2016, etc.) can’t seem to keep out of her own way or avoid sidelining the supposed heroine in this 15th franchise installment. But the character who does take the lead deserves to keep it, and the ending helps make up for the cumbersome plot.

SINS OF THE FATHERS
by J.A. Jance
Fiction

DUEL TO THE DEATH
by J.A. Jance
Mystery

FEVER IN THE DARK
by Ellen Hart
Mystery

TELL ME NO LIES
by Lynn Chandler Willis
Newsletter sign-up