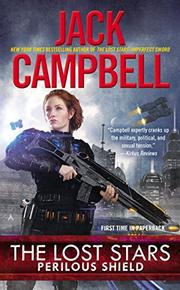 Second of the spinoff series (The Lost Stars: Tarnished Knight, 2012) featuring the struggle of two former CEOs, Gen. Artur Drakon and President Gwen Iceni, to bring the newly independent crossroads Midway system out from under the shadow of the brutal Syndicate.

It won’t be easy, though. As this one opens, a powerful Syndicate flotilla threatens Midway, and although Drakon’s ground forces are strong and well-organized, neither they nor Iceni’s pitiful handful of warships is capable of defeating it. Worse, a huge fleet of alien enigmas shows up, against which Midway is helpless. Fortunately, right behind the enigmas comes legendary Alliance Admiral “Black Jack” Geary—series regulars will rejoice—with a supercolossal battleship captured from the alien Kicks in tow and accompanied by friendly alien Dancers. Black Jack, despite his war-weary crews and battered ships, is more than capable of kicking both enigma and Syndicate butt; however, after the long and bloody Syndicate-Alliance war, trusting the Alliance goes against the grain. But Drakon and Iceni’s problems run much deeper. As former CEOs, they do not and cannot afford to trust one another too much. Neither has much of an idea of what true democracy entails. Their chief subordinates, Drakon’s Malin and Morgan—they loathe one another—and Iceni’s eerie bodyguard, Togo, may or may not decide to act independently. And somebody, perhaps several somebodies, is plotting to assassinate Drakon and Iceni in such a way as to make it seem as if the other party were responsible. Again, Campbell expertly cranks up the military, political and sexual tension, although the intensity wanes when the focus drifts away from the main characters.

The author is dragging things out a bit but not to the point where readers will begin to peel away.

BEYOND THE FRONTIER: INVINCIBLE
by Jack Campbell