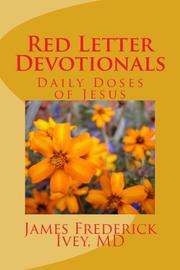 This daily devotional work offers the words of Jesus Christ as recorded in the Bible, along with commentary and suggested prayers.

As many other 365-day devotional guides have done previously, this book provides a biblical extract each day, a reflection on its meaning, and an accompanying prayer. Here, the quotations are limited to the words of Jesus, which, in some printings of the New Testament, are rendered in red lettering—hence the title. The quotations can be quite short, from a line or two to long passages that Ivey (Science, Philosophy, and Jesus Christ, 2015, etc.) discusses over several days. As in his previous works, Ivey aims to prove the truth of Scripture through Christian apologetics, “wherein one seeks hard evidence…that the message of the Bible is valid.” But the book’s notion of hard evidence seems suspect as an investigation that seeks only validity is an exercise in confirmation bias. The book cherry-picks evidence, for example, when it praises Albert Einstein’s understanding of space-time and writes that he “contributed massively to the apologetics of the Biblical God.” But in 1954, near the end of his life, Einstein wrote that “The word God is for me nothing more than the expression and product of human weaknesses, the Bible a collection of honourable, but still primitive legends.” The book never grapples with such contradictions, nor does it seem to take other religions’ claims of truth seriously. It airily dismisses the entire edifice of Hinduism, for example, because “one can believe almost anything and call themselves a Hindu.” Ivey’s commentary, however, does offer some thoughtful insights that readers may appreciate; for example, when Jesus’ own family wants to speak to him while he’s preaching, he replies (in Luke 8:21), “My mother and my brothers are these who hear the word of God and do it.” Interestingly, Ivey sympathizes with the relatives, using the passage to talk about isolation; the accompanying prayer asks the Lord to “help us to realize that others may subsist in a world of loneliness that we perhaps could not bear.”

Ivey’s apologetics will convince few skeptics, but likeminded readers will find it a useful tool.

The Inside of the Cup
by Gerald C. Monge
Newsletter sign-up