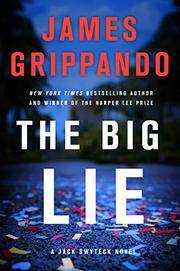 Want a break from the ruthless 24/7 cycle of political ups and downs? Stay miles away from this latest case for Miami attorney Jack Swyteck (The Girl in the Glass Box, 2019, etc.), ripped not so much from the headlines as from your deepest electoral nightmares.

Despite the manifest character blemishes—blustering, lying, uncontrollable adulteries, and tweetstorms that nearly got him impeached—President Malcolm MacLeod seems headed to a narrow victory over Florida Sen. Evan Stahl Jr., whose ratings took a nose dive when his refusal to identify the party with whom he’d cheated on his now-estranged wife, Gwen, of the Florida Department of Law Enforcement, led to widespread speculation, eagerly fed by MacLeod, that his lover was (gasp!) another man. Stahl’s only path to the presidency is the hope that five members of the Electoral College will break ranks and cast their votes for Stahl, who won 5 million more votes than MacLeod despite losing the Electoral College. And at least one elector is ready to turn faithless: Charlotte Holmes, the associate and hand-picked successor to gun rights lobbyist Madeline Chisel. Will her principled defection start a groundswell? Not if MacLeod loyalist Paulette Barrow, the Florida attorney general, has anything to say about it. Barrow promptly files a suit against Charlotte as “unfit” so that the Republican governor, Terry Mulvane, can replace her with a reliable loyalist. Seeking Jack’s legal representation with the perfect come-on—electoral law expert Matthew Kipner “specifically told me not to hire you”—Charlotte stiffens her spine and prepares for weeks of public abuse. What she doesn’t prepare for is the wholly unexpected but obligatory trial for murder that simultaneously deepens her peril, confirms this headlong legal thriller’s genre credentials, and ensures that no one will mistake it for real life. The complications that follow are expertly spun, and the courtroom maneuvers on both sides are impressively baroque, but the gorgeous Electoral College premise marks the beginning of a wild ride that runs off the rails long before the fade-out.

The multilayered case gets so crazy that it may provide escapist solace after all.

THE GIRL IN THE GLASS BOX
by James Grippando
Mystery

A DEATH IN LIVE OAK
by James Grippando
Fiction