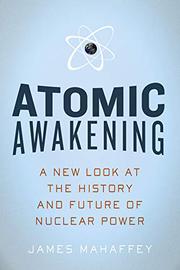 A New Look at the History and the Future of Nuclear Power
by James Mahaffey
BUY NOW FROM
AMAZON
BARNES & NOBLE
LOCAL BOOKSELLER
GET WEEKLY BOOK RECOMMENDATIONS:

Georgia Tech Research Institute senior scientist Mahaffey begins with the discovery of radiation in the 1890s but concentrates on the period after World War II, when the great powers took time out from building bombs to explore peaceful uses of nuclear energy. The narrative’s hero is U.S. Navy Admiral Hyman Rickover, the “Father of the Nuclear Navy,” whose reactor design for the nuclear submarine emphasized safety and sturdiness over cost. Aside from nations that wanted to build cheaply, such as the Soviet Union, Rickover’s design became the standard. Ending around 1963, the “Age of Wild Experimentation” included failed attempts to dig canals, drive spaceships (a good idea, according to the author) and propel jet bombers (a horrifying radiation-drenched Air Force project narrated by Mahaffey with laugh-out-loud irony). The author emphasizes that, in the absence of a breakthrough in solar, wind or fusion technology, nuclear power remains the sole practical source of clean energy. While France generates 87.5 percent of its electricity from nuclear power, the United States reached 20 percent in the late ’70s and stalled—money, not fear of radiation, was largely responsible. Despite enthusiastic claims after WWII, generating electricity from the atom is no bargain, and once the U.S. government stopped subsidizing nuclear plants, utilities companies remembered that American coal is the world’s cheapest source of power. Global warming and rising hydrocarbon costs took their toll, and in 2007, after a 30-year absence, U.S. regulators received the first of a stream of applications to build a nuclear plant.