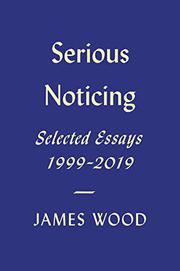 The veteran New Yorker book critic returns with a collection of erudite pieces dating to 1997.

Wood (Literary Criticism/Harvard Univ.; Upstate, 2018, etc.) offers another selection of his incisive work; only a half-dozen pieces here have not appeared in previous collections. Those familiar with the author’s style will not find much surprising in that regard. Throughout this latest gathering, we see indications of his vast reading, summaries (sometimes lengthy) of key works, connections to other works by other writers in other times and places, and a willingness to identify the good, the bad, the ugly, the best, and the greatest. In this volume, there is only one essay that is principally negative: a review of the writing of Paul Auster. “There are things to admire in Auster’s fiction,” writes Wood, “but the prose is never one of them, though he is routinely praised for the elegance of his sentences.” But other writers receive Wood’s deep appreciation: Saul Bellow (“probably the greatest writer of American prose of the twentieth century”), Dickens, Chekhov, Tolstoy, Dostoyevsky, Orwell, Austen—these and others have earned Wood’s almost undiminished admiration. Other writers also come off well, with a mild reservation now and then (Virginia Woolf, Melville). As Wood’s readers well know, he delights in introducing them to new voices from places they probably didn’t expect—among them, Bohumil Hrabal (Czechoslovakia), László Krasznahorkai (Hungary), and Elena Ferrante (Italy). Wood, however, does not directly address the issue of reading in translation. Less literarily inclined readers will admire his personal essays, many of which are profoundly moving and/or eye-opening. These include an account of his move from England to the United States, a tribute to his late father-in-law’s library, and his electric appreciation and dissection of the drumming of The Who’s Keith Moon.

THE NEAREST THING TO LIFE
by James Wood
Nonfiction

THE IRRESPONSIBLE SELF
by James Wood
Fiction

THE BOOK AGAINST GOD
by James Wood
Nonfiction