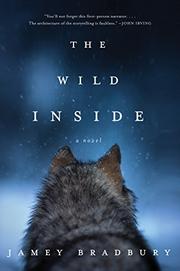 An Alaskan teenager on the cusp of adulthood is drawn to the feral life.

Although the folksy and stubbornly ungrammatical voice of Bradbury’s first-person narrator, Tracy Petrikoff, takes some getting used to, it conveys a visceral sense of her world. In the nearly two years since her mother’s death, a month before Tracy’s 16th birthday, her home life has been thrown into disarray. Now nearing 18, Tracy hopes to enter her first adult Iditarod. But her father, Bill, a champion musher, has given up the sport and is deaf to Tracy’s pleas to let her train. Younger brother Scott has retreated into his books and photography. Other than tending the fleet of sled dogs her family still maintains, she is officially grounded—she’s been expelled from school for fighting. However, Tracy easily evades her father’s halfhearted discipline to set woodland traps. Her catches—martens, minks, hares, and squirrels—provide meat for the family and pelts to sell in the nearby village. Furthermore, trusty hunting blade in hand, Tracy gains essential strength from drinking the blood of her prey while also temporarily mind-melding with victims. One day in the woods, a strange man slams Tracy against a tree root and she blacks out. When the man, Tom Hatch, shows up at her home, bleeding from a stab wound, Tracy assumes she inflicted it. Returning to the scene of her supposed crime, Tracy finds a backpack containing wads of cash, enough to enter the Iditarod. Jesse Goodwin, a young drifter, appears, taking on the role of hired factotum. Tracy and Jesse develop a special bond after she learns Jesse was fleeing Hatch. However, Jesse is not what he seems. The ingredients of a thriller with surreal elements are all in place, as Tracy suspects that Hatch has recovered and may be seeking revenge. From here the plot veers off in directions that are not only unexpected, but at time beggar belief. Still, readers will warm to the unconventional persona Bradbury has crafted for Tracy, that of wilderness savant.

A strange and soulful debut.

THE LAST WOMAN IN THE FOREST
by Diane Les Becquets
Fiction

IN PINELIGHT
by Thomas Rayfiel
Fiction

AND SHE WAS
by Cindy Dyson
Fiction