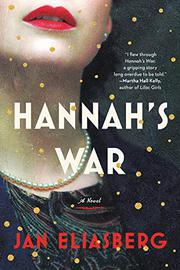 A Jewish nuclear physicist is accused of spying while working on the nuclear bomb in Los Alamos.

During the waning months of World War II, the Americans and Germans are in a race to develop nuclear weapons; whoever wins, wins the world. Many refugee European scientists are working for the U.S. nuclear effort, headed by American physicist J. Robert Oppenheimer. Among these refugees is Dr. Hannah Weiss, loosely based on Dr. Lise Meitner, the unsung physicist who discovered nuclear fission. Maj. Jack Delaney has come to Los Alamos to interrogate Hannah, suspected of being a Nazi mole. His suspicions are founded on a telegram she may have attempted to send overseas and a packet of postcards gleaned from a search of her room. Flashbacks to 1938 Berlin are interspersed throughout. Hannah, a brilliant scientist, is relegated to a basement lab of the Kaiser Wilhelm Institute and treated as a “Jewish slave.” Her work on atom splitting is so valuable to the Reich, however, that what remains of her family—her Uncle Joshua and niece Sabine—have so far escaped the worst impacts of Nazi persecution. Her colleague Stefan, whose playboy charm Hannah tries to resist, takes credit for her work. But Stefan will eventually help Sabine, and then Hannah, escape Germany, and love overcomes her distrust. But should it? Screenwriter and TV director Eliasberg’s first novel effectively evokes the atmosphere; descriptions of setting are never merely ornamental. However, her characters lack interiority. Jack never quite transcends the stereotype of the hard-boiled detective with inner wounds to match his external ones: A bullet he took during the liberation of Paris is still lodged near his spine. Hannah is the beautiful ice queen who conceals a molten core of passion. Far from delivering the intended frisson of growing attraction, Jack and Hannah’s verbal sparring is too often verbose and didactic. The characters are so one-dimensional that readers won’t particularly care which side they’re on.

A flawed novel which could, with the right cast to lend emotional depth, make very good TV.

RACING FOR THE BOMB
by Robert S. Norris
Fiction

THE GENERAL AND THE GENIUS
by James W. Kunetka
Newsletter sign-up