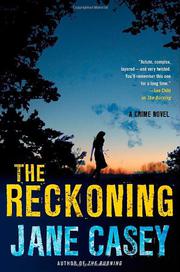 Romance and gore vie for the attention of a London detective constable.

Barry Palmer’s skull was fractured. Ivan Tremlett’s throat was cut. Fintan Kinsella’s head was blown off. Would a single perp so vary his method? DC Maeve Kerrigan, recovering from the trauma of her last case (The Burning, 2011, etc.), hesitantly reigniting her relationship with fellow copper Rob Langton and recently moved into a new flat across from a nerdy neighbor, is working the murders with her new partner, the chauvinistic Derwent, when a confession sends it careening off in another direction. John Skinner, mastermind of most of the city’s major crimes, admits he ordered the killings, with torture added to wrest out information about the disappearance of his daughter Cheyenne. Where is she? More bodies will turn up before her corpse surfaces adorned with DNA belonging to Patricia Farinelli, reported missing 18 months ago in Stoke Newington, though there was never a proper investigation into her whereabouts. Meanwhile Skinner, a longtime nemesis of Supt. Godley, has issued threats against his family, and a stalker has snapped pictures of Maeve and taunted her with them. So many questions, so many theories. Is Patricia, like Cheyenne, a victim or a participant in her abduction? Has a rival mobster plotted Skinner’s downfall by taking his daughter? Will Godley collapse under pressure against his family? Is the stalker one more piece of the Patricia/Cheyenne puzzle or a separate player altogether? Maeve, despite the doubts of Derwent, and Rob, who focuses on a departmental leak, work it all out, including the consequences of love.

At least one subplot too many dragged in toward the end, but otherwise a neatly drawn study of male-female working relationships, commitment phobia and the grimier aspects of police work.

AFTER THE FIRE
by Jane Casey
Mystery

THE KILL
by Jane Casey
Mystery

THE BURNING
by Jane Casey

THE CHILDREN OF MEN
by P.D. James
Fiction