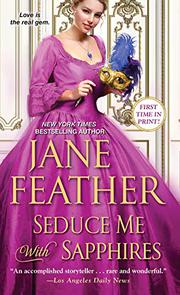 SEDUCE ME WITH SAPPHIRES

Two thespians strut and fret and argue throughout their hour upon the stage together.

The Honorable Miss Fenella Grantley knows she should be grateful for her life of ease and privilege, but everything feels unrelentingly gloomy to her. Except, that is, when she sneaks out to Bloomsbury for her acting classes. Those classes get even more interesting when playwright Edward Tremayne, by-blow of the Earl of Pendleton, comes to class with a draft of his newest work, Sapphire. She takes an immediate dislike to Edward and his “arrogance and contempt,” so he takes her for hot chocolate to apologize for his rudeness. And despite the fact that the two can’t go more than a few sentences at a time without bickering, they soon become intimate, and a few days later, they’ve not only slept together, but Fenella is also concocting elaborate excuses to spend the night at his lodgings. Both are prickly and prone to misunderstandings, but they are continually drawn back to each other and have to decide whether their chemistry can or should survive the tumult of these continuous conflicts. Unfortunately, it will be hard for many readers to look forward to this happy ending. From their first meeting, Edward seems unnecessarily unkind to Fenella, and although this is supposedly because of his nerves and attraction to her, modern sensibilities may find him creepy and overbearing rather than charming. Additionally, his obsession with Sapphire and insistence that Fenella perform her role in exactly the way he’s imagined it is an unfortunately timeless example of a male artist who puts his ego before all others—not exactly the swoon-inspiring stuff of a romance hero. For her part, Fenella is pleasingly independent, which makes her attraction to Edward all the more confusing. The book, second in a series but able to stand alone, may appeal to Feather’s longtime fans but is unlikely to work for readers who aren’t already inclined to give her the benefit of the doubt.

An Edwardian theater love story that tests the boundaries of just how unlikable a romance hero can be.

TEMPT ME WITH DIAMONDS
by Jane Feather
Fiction

TO KISS A SPY
by Jane Feather
Fiction