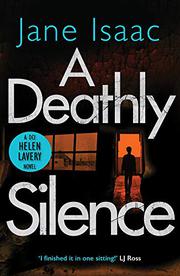 DCI Helen Lavery, back together with Hamptonshire’s Homicide and Major Incidents Squad after a job-related injury sidelined her for eight weeks, is welcomed back in the worst possible way: by the torture/murder of a fellow officer.

Everybody loved DC Sinead O’Donnell, from her husband and colleague, training officer Blane O’Donnell, and their two young children to the locals she kept in line with a firm but gentle hand. So who handcuffed her to a pipe in an abandoned building, burned her arms, chopped off her fingers, and cut her throat? And why, to turn to a question that’s less consequential but equally vexing, did she make no attempt to fix or report the flat tire on her car on the morning of her murder? The dog walker who reported finding the dead body and seeing two live schoolboys fleeing the scene can tell Helen nothing, and the two boys, when she finally tracks them down, have precious little to add. Yvette Edwards, the neighbor Helen took it upon herself to interview, is shortly drowned in her bath, though it looked like a suicide, and the very real possibility that her murder might be connected to a similar killing more than 20 years ago of office clerk Evelyn Ferguson by Gordon Turner is seriously undermined by Turner’s fatal overdose. Is it possible that Sinead’s death was the work of crime lord Chilli Franks, whom Helen’s tangled with before to both of their costs? Or is the killer someone closer to home, as the leaking of privileged information from the investigation to the public uncomfortably suggests? Isaac goes to such lengths to conceal the culprit’s identity that most readers will be caught off guard, though some may cry foul.

A sturdy English procedural with modest but mostly unfulfilled aspirations to be something more.