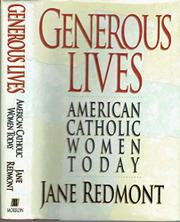  A smooth weave of oral histories and scholarly analysis that shows that Catholic women are just like everyone else. Redmont, Northeast regional director of the National Conference of Catholics and Jews, draws on interviews with 110 women, aged 17 to 92, rich and poor, conservative and liberal, single, married, divorced, and widowed. The survey, then, is small but ``purposefully inclusive.'' By and large, these Catholic women echo the national mood: evenly divided on abortion, to mention the hottest topic, but with the same appealing idiosyncracies that one finds in America at large (pro-choice Republicans, pro-life feminists). Most oppose capital punishment, are uneasy about homosexuality, reject radical feminism but have a deep respect for the ``innate wisdom'' of women. On Catholic-oriented issues, where Redmont places most of her attention, results run the same. Half of the women pray regularly, go to confession, claim a devotion to Mary; the rest shrug off these traditional practices. The loudest argument with the Church is about divorce; the highest praise, for the Church's work against poverty. Two surprises: widespread ambivalence over ordination of women, and support from many Hispanics for the Church's ban on birth control. The oral histories have the ease and directness of chats with a backyard neighbor. Marlene Jones says that ``Jesus is the man who got me through my divorce.'' Nancy Vitti thinks the Pope ``should stay home a bit.'' Sylvia Park, 92, says, ``I thank God every day that I had my religion.'' Redmont celebrates this ordinariness and suggests that Catholicism is the most feminine of religions, pointing out that the belief that ``God is present in the ordinary life is characteristically Catholic. It is also characteristically female.'' An admirable survey, above all for its refusal to follow an ideological agenda. As such, far more valuable than recent agitprop on similar topics, such as Sherry Anderson and Patricia Hopkins's The Feminine Face of God (1991).