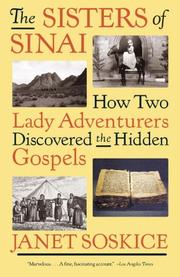 THE SISTERS OF SINAI

Jesus College fellow Soskice (The Kindness of God: Metaphor, Gender, and Religious Language, 2008, etc.) examines the life and work of the little-known sister “bible-hunters” who unearthed many significant ancient manuscripts.

The book is as much about academic controversies surrounding biblical scholarship during the Victorian era as it is about the two proto-feminist twins, Agnes and Margaret Smith. Born to a prosperous father in Irvine, Scotland, the Smith sisters were rigorously educated in the Presbyterian faith, physically robust and eager to travel, making their first adventurous trek to Egypt upon the death of their father in 1866. They taught themselves Arabic and Greek. Agnes began to study Syriac—a dialect of Middle Aramaic—in preparation for travels to Sinai to dig for early texts of Christianity that might have been overlooked by adventurer-scholars such as Constantin von Tischendorf. The possibility that there might be texts still hidden in St. Catherine’s monastery, at the foot of Mt. Sinai, was first introduced to the sisters by J. Rendel Harris, an oriental-studies scholar at Cambridge, where the sisters had relocated after the deaths of their respective husbands. Encouraged, the twins set off in 1892 for St. Catherine’s, which housed a wondrous library. There Agnes discovered that underneath a manuscript about the lives of saints existed another, much older text, a palimpsest that would prove to be the earliest known copy of the Gospels in Syriac. Subsequent trips to Sinai in the company of Cambridge scholars led to more marvelous discoveries, as well as attempts to reassign credit among them all. Though the sisters were originally viewed as merely eccentric women, Soskice effectively demonstrates their important contributions to biblical scholarship in the 19th century.