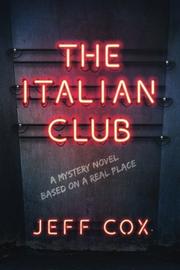 A Mystery Novel Based on a Real Place
by Jeff Cox
BUY NOW FROM
AMAZON
BARNES & NOBLE
LOCAL BOOKSELLER
GET WEEKLY BOOK RECOMMENDATIONS:

Members of a Pennsylvania social club find themselves at risk when a motorcycle gang rides into town in search of a sizable stash in this thriller.

Two bikers walking into the Italian-American Club in Oxton definitely stand out. Bartender Kimmy can serve only club members and signed-in guests. Furthermore, the men, looking for just-out-of-prison Pasquale “Pazz” Vukovic, belligerently demand drinks before finally leaving. Pazz, as it happens, using information from his dying cellmate, is after loot reputedly hidden somewhere in the club. Around the same time, Speedy, having recently lost his job as a maintenance man, inadvertently trips the club’s alarm early one morning. Joe Lorenzo, editor-reporter of a local weekly, thinks Speedy was the inside man for an attempted break-in. Things get more suspicious when Speedy turns up in a creek with a bullet hole in his head. Convinced the cops aren’t interested in solving the murder, Joe, a former investigative reporter, starts his own probe. Complicating matters is another bartender, Tracy, who’s harassed by both her pre-prison boyfriend, Pazz, and rich ex Derek. There are also those bikers, the Death Dealers, four in all, who’ve been frequenting bars in the area, asking about Pazz. Murders, meanwhile, continue, making it abundantly clear that someone’s willing to kill to get what he or she wants. Business author Cox’s (Hanging Fire, 2014, etc.) first foray into thriller territory is surprisingly lighthearted, notwithstanding spurts of violence; readers witness at least one shooting that’s chilling in its terseness. The characters and club setting, however, are so richly detailed that they feel warmly familiar. Moments like patrons at the bar with piles of cash in front of them (to avoid “fumbling with wallets”) are comical high points. The mystery is minimal, with just one truly unknown element—whether or not the dough is actually in the club. But trepidation in the final act is thoroughly elevated, putting several lives, including Joe’s, in peril. There are far too many excellent, well-rounded characters to list, all with their personal back stories. But Joe’s potential love interest, Annette, is memorable, caring for her dementia-ridden mother with no help from her sister Darbie, who revels in telling everyone her sibling’s probably a lesbian.

An undemanding murder story reinforced by superlative characters who need not even leave the bar.