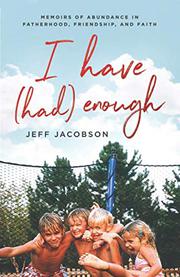 I HAVE (HAD) ENOUGH

A collection of Christian essays explores the ups and downs of parenthood.

Life is full of surprises, but even when things don’t go according to plan, you can still end up in a pretty good place. Just ask Jacobson (So I Go Now, 2006), whose experiences raising four children with his wife—and best friend—have brought all manner of the unexpected into his life. There’s the standard fodder for fathers flabbergasted by their kids’ ignorance of societal norms, as when the germophobic Jacobson witnessed his son Levi attempt to pick up a penny from the floor of a public restroom: “It’s no exaggeration to say that I died a thousand deaths as he reached for it, and then I saved him from certain peril at the last possible moment. As I pulled him out of that man-made hell, I was screaming on the inside while Levi was screaming on the outside.” There are also more serious tests, as when, after years of struggling with infertility, the author’s wife experienced a difficult birth with their twin sons. After some lighthearted introductory essays, Jacobson takes a thematic approach to his storytelling, devoting one section each to his children (his first son, destined to become a Marine; the rambunctious twins; and his daughter, the apple of his eye); another to his childhood friend Jimmy, whose death in the World Trade Center attacks still haunts the author; and a final segment to his belief in Jesus. Jacobson’s prose is breezy and jokey even when he discusses more emotional subjects: “It’s winter again and I’ve lost my energy. I’m not sure where it went. Maybe it checked out on me and caught the last train for the coast and it’s prancing around in some sun-drenched town, shopping maybe, or riding a bike.” It isn’t a terribly probing work, though the final section, which imagines Jesus in a number of contemporary scenarios, is a bit more subversive than it initially appears. Even so, many fathers will likely see themselves in Jacobson, and his cheery demeanor may help assure those just starting out that, whatever happens, things will probably be just fine.

A warm, crowd-pleasing volume of Christian-tinged essays on fatherhood.