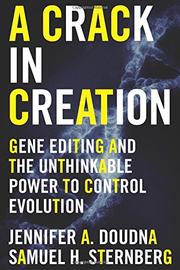 A CRACK IN CREATION

Gene Editing and the Unthinkable Power to Control Evolution
by Jennifer A. Doudna & Samuel H. Sternberg

A pair of biochemists offer a fresh examination of the “newest and arguably most effective genetic-engineering tool.”

Biological spectaculars—e.g., genetic engineering, cloned sheep, in vitro fertilization—have produced headlines and bestsellers but flopped where it counts: they don’t save many lives. CRISPR (clustered regularly interspaced short palindromic repeats) is changing that, write Doudna (Chemistry and Molecular Biology/Univ. of California; co-author: Molecular Biology: Principles and Practice, 2011, etc.) and Sternberg in this enthusiastic and definitely not dumbed-down account of gene manipulation that, unlike earlier methods, is precise and easy. In the first half of the book, “The Tool,” the authors summarize a century of research but focus on the discovery, in the early 2000s, that bacteria possess an ingenious immune system that destroys invading viruses by cutting their DNA into pieces. Within the past decade, researchers converted this into an ingenious technique for literally debugging DNA: putting in good genes in the place of bad. “Because CRISPR allows precise and relatively straightforward DNA editing,” write the authors, “it has transformed every genetic disease—at least, every disease for which we know the underlying mutation—into a potentially treatable target.” The second half, “The Task,” describes the miraculous powers of CRISPR to cure disease and control evolution—but not yet. Replacing a single defective gene cures muscular dystrophy in mice; clinical trials in humans for this and similar disorders (sickle-cell, hemophilia, cystic fibrosis) are in the works. CRISPR can’t yet cure cancer, prevent AIDS, wipe out malaria, revive the wooly mammoth, or regenerate a limb, but an avalanche of startups (Doudna’s included) is betting billions that it eventually will.

An important book about a major scientific advance but not for the faint of heart. Readers not up to speed on high school biology should prepare themselves with a good popular primer on DNA, such as Matthew Cobb’s Life’s Greatest Secret (2015).

THE SEEDS OF LIFE
by Edward Dolnick
Nonfiction

A CRACK IN CREATION
by Jennifer A. Doudna
Nonfiction

ASTROPHYSICS FOR PEOPLE IN A HURRY
by Neil DeGrasse Tyson
Nonfiction

THE INHERITANCE
by Niki Kapsambelis
Nonfiction

THE GENE
by Siddhartha Mukherjee
Nonfiction

SHE HAS HER MOTHER'S LAUGH
by Carl Zimmer
Nonfiction