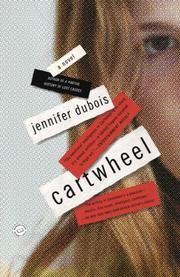 A young, white American woman studying overseas is accused of murdering her roommate. She is seen through different prisms in this second novel from duBois (A Partial History of Lost Causes, 2012).

According to the author, “the themes of this book were loosely inspired by the story of Amanda Knox.” The first link is the title, which appropriates Amanda’s notorious cartwheel while in police custody in Italy. The cartwheeler here is 20-year-old Lily Hayes. She has come to Buenos Aires, ostensibly, to further her studies. Her roommate is bland, beautiful Katy Kellers from Los Angeles. Their neighbor, who lives by himself in a decaying mansion, is the ridiculously rich American Sebastien LeCompte. The young, lonely, epicene Sebastien, who hides his true self under layers of affectation, belongs in Capote country. He would seem an improbable boyfriend for either of the women, yet he and Lily begin a relationship, with Lily calling the shots. The horror comes one night when Lily finds Katy stabbed to death. The state investigator, Eduardo Campos, is convinced of Lily’s guilt. The novel begins with Lily’s professor father, Andrew, visiting her in a holding cell. It cycles through four viewpoints (Andrew, Lily, Sebastien, Eduardo) and moves between the buildup to the murder and its aftermath. The author may have been hoping to combine a crime novel with a novel of character. Neither one works. The awkward construction means suspense is minimal. Attempts to cannibalize Amanda’s story, such as Lily’s fingering of her black boss at the club where she worked weekends, fall flat. Lily herself is a not very interesting addition to those thousands of young Americans looking to spread their wings in an exotic locale. Readers are meant to presume her innocence while retaining a tiny sliver of doubt, reinforced by that ballyhooed, albeit irrelevant, cartwheel. So what really went down? The dubious confession of the killer is the only clue.

A tangled tale that leaves protagonist Lily, and the crime, unilluminated.

THE SPECTATORS
by Jennifer duBois
Fiction

A PARTIAL HISTORY OF LOST CAUSES
by Jennifer Dubois

ALL THE BIRDS, SINGING
by Evie Wyld
Mystery

The Wrong Road Home
by Ian A. O'Connor
Fiction