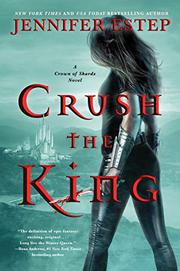 When the murder of Bellona's royal family set Evie on the path to claim the throne herself, she swore to kill the man responsible: evil King Maximus, of neighboring Morta. Now, after forming some alliances, she's ready for the task, as well as ready to keep fending off yet more attempts on her life. As in the previous books, the task of fighting magical assassins is made easier by Evie's unbeatable secret power of simply being immune to magic. Evie and her friends, the members of her former gladiator troupe, travel to the Regalia, a tournament of skill, with plans to use the festivities to confront and defeat Maximus—a villain so over-the-top in his sadism and arrogance that he's hard to take seriously. It's hard to take any of the threats Evie faces seriously either: Whether it's hordes of assassins, a magical tidal wave, or the supposed unmatched arcane power of Maximus himself, Evie's trump card—her magical immunity—continues to save the day. It's sadly predictable, as is the plot itself; the finale is telegraphed early on, and a supposed twist at the end is nonsensical. The supporting cast suffers, too: Lucas Sullivan, Evie's lover who drove much of Book 2, does nothing here but gaze at Evie with alternating lust or worry; Paloma, Evie's bodyguard, gets a potentially interesting subplot...that is resolved completely off-page. The endless descriptions of parties, dresses, attractive people—and the constant narrative claims that our heroine is supposedly good at intrigue—just add to the sense that we've been here before.

A disappointing conclusion to a series that certainly wants to be epic and edgy but only manages to settle into its own ruts.