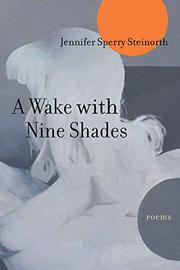 A WAKE WITH NINE SHADES

This volume of poetry offers accomplished attention to form, originality of language, and a look at the challenges of midlife.

Many of the poems in Steinorth’s (Forking the Swift, 2010) collection first appeared in literary journals, and the book was a finalist for several prizes. The second poem, “W a k e : A Sleep in Forty-Something Winks,” is, a note explains, patterned after Caroline Bergvall’s poem “VIA (48 Dante Variations) mix w fractals,” which is based on English translations of the opening lines of Dante’s Inferno. Like Dante’s narrator, the speaker in Steinorth’s poem is at a midpoint in a dark place, her sense of direction confused: “Midway through our night’s sleep / I woke to find the dream lost.” The several definitions of wake (a vigil for the dead; to rouse from sleep; the track left on water) connote alertness and the clarity of seeing your path, but the speaker paradoxically loses that lucidity with full consciousness. (The boat’s wake image recurs in “Wake & Island”: “The surface just before us always / smooth…and when we / mar it it repairs itself.”) A productive confusion of boundaries is also suggested by the subtitle of “W a k e”: A nap is a daytime sleep, and winking is partway between open and shut eyelids. Many poems touch on the domestic: paying bills, shoveling snow, scrubbing a pot—but something else always breaks through. The collection is haunted by the suicide of the speaker’s father-in-law and her difficulty dealing with it: “I am brave when I say he shot himself / braver / not so brave as him / —scratch that—.” As in many other pieces, this one uses form to great effect, the short centered lines forming a column like the fall of water in the shower where the suicide took place, ending with “the uncomfortable / circumferences / of drain.” The gurgling repetition almost magically evokes its subject; the final word, “drain,” is as stark as the facts. But sly wit also inhabits the volume, as with the sequence of “billets-doux” between the speaker, “a midlife poet flirting with crisis,” and Robert Frost.

A fine collection of poetry that strikingly engages readers with complexity.