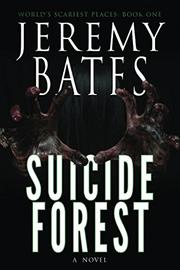 In Bates’ (The Taste of Fear, 2012, etc.) horror novel, a simple excursion into a reputedly haunted forest turns into a nightmare when people start dying in conspicuously unnatural ways.

Ethan Childs, an American teaching English in Tokyo for the last four years, plans to climb Mount Fuji with girlfriend Mel and a few pals. But when a looming storm nixes the outing, Israeli tourists Ben and Nina convince the group to join them on a hike through nearby Aokigahara Jukai. The forest is infamous for an incredibly high number of suicides, reportedly in the hundreds per year, and some believe the ghosts of the dead haunt it. What begins as an unsettling ambience (there are no sounds of animals or any trace of wind) quickly gives way to serious, tangible threats when one of the party members dies from an apparent suicide. Ethan and company are soon lost, and the noises they hear in the woods either confirm the existence of ghosts or, perhaps worse, mean that a murderer is tracking them down. Readers may recognize a slasher-film vibe—people willingly go into the creepy woods—and familiar characters, like the smart friend, Honda, who stays behind and the obnoxious jerk, John Scott, who reaps much of Ethan’s animosity. But Bates’ approach to the story is surprisingly restrained, cultivating impressive frights in the unnerving environment: The trees have “skeletal hands,” for instance, and the forest is so dense that the sky practically disappears on a hike that’s hardly begun. The latter part of the novel becomes a desperate fight for survival as the group runs out of water and is further burdened by both an ailment and severe injury. The story’s ambiguity, however, is retained throughout: No one is sure whether the unseen villain is human or apparition or whether they are simply victims of unfortunate circumstances. Back stories help shape the characters, including Ethan and Mel’s relationship, hampered by possible infidelity, and the protagonist tormented by the death of older brother Gary, killed by a robber. The story, decelerated by its big reveal, loses some of its steam near the end, but the conclusion is potent and not easily anticipated.

Bates’ choice to avoid brazen scares makes for an understated horror story that will remind readers what chattering teeth sound like.

THE TROOP
by Nick Cutter
Fiction