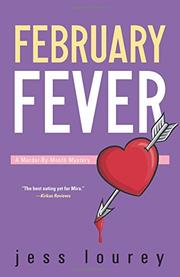 Mira’s boyfriend, Johnny, has announced that he’s leaving for four months to do an environmental science internship in Portland, Oregon. She’s depressed until her octogenarian buddy Mrs. Berns insists that she and Mira travel to Portland for a private investigators’ conference and finds the acrophobic Mira an alternate way to travel. A special Valentine Train is heading that way, so Mira, Mrs. Berns, and their laid-back pothead friend, Jed Heitke, climb aboard. As Jed points out, at least she won’t find another body in tiny Battle Lake, Minnesota, as she has every month since she moved there. Instead, she finds a body on the train. Across from Mira and Mrs. Bern’s tiny sleeping compartment is a family whose young daughter, Aimee, reminds Mira of her childhood best friend, a girl who was kidnapped before Mira’s eyes and never found. So when the mother is found poisoned and her husband and daughter vanish, Mira is determined to find Aimee. Terry Downs, another private eye, is already on the train, and before it’s allowed to leave, still another, TV star Doghn Attenborough, shows up looking for publicity. The conductor asks the three of them to investigate. As Mira snoops around, she convinces herself the murderer is still aboard and decides that only Mrs. Berns and Jed can be trusted. When the train gets stuck in a violent snowstorm, hysteria sweeps the passengers, making the investigation even more difficult.

The best outing yet for Mira (January Thaw, 2014, etc.). There’s still a surfeit of eccentric characters, but the mystery keeps you guessing and sets up the sequel nicely.

MIDNIGHT ON THE MISSISSIPPI
by Mary Ellis
Mystery