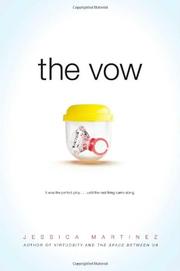 Two privileged Kentucky teens concoct a sham marriage to prevent one’s deportation, generating fallout neither is prepared to cope with.

Mo (short for Mohammed), 17, and Annie, 18, have been platonic best friends since she rescued the newly arrived immigrant from ridicule in fifth grade, and in turn, he coaxed Annie, socially immobilized by her sister’s death, back into the world. Mo’s summer plans include basketball camp and eventually Harvard or Yale, Annie’s, a summer job her sister once held, then art school. Both are devastated when Mo’s father is laid off and must take his family back to Jordan. Annie talks Mo into marriage though they’re warned of potentially grim legal consequences. Narrating alternating chapters, Mo and Annie are rounded, believable and sympathetic; yet to serve the plot, they must behave in ways that make little sense. Both are careful and observant, unlikely to jump off a bridge without at least looking over the edge first. An odd narrative tension results, as if the characters would much rather do something else. Looming over the story is the urgent, hot-button issue of U.S. teens raised with American identities but lacking legal status. For Mo, deportation means returning to his wealthy family in Jordan and applying for a student visa for an Ivy League education—lowering the stakes from potentially devastating to merely inconvenient.

THE SPACE BETWEEN US
by Jessica Martinez
Children

ASK ME NO QUESTIONS
by Marina Budhos
Children