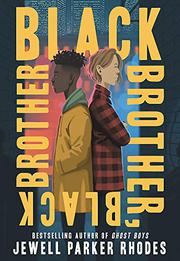 This outing starts with Donte Ellison wishing for invisibility, as compared to being a hypervisible “nighttime dark” student at upper-crust, overwhelmingly white Middlefield Prep. Maybe if he were invisible, he wouldn’t constantly be in trouble for doing nothing—unlike his older and much-lighter-skinned brother, Trey, who walks the hallways with cool. A tragic, unjust incident occurs early on when the headmaster sends for police officers to handcuff, arrest, and jail Donte after an incidental brush with a teacher. Donte’s mother (she is black and their father white) challenges the school on its racism, yet within the social world of the schoolyard, the injustice is further compounded by bullies’ smirks. Donte responds by devising a plan to make the school see him, in all his dignity, respect, and potential. He leaves the upper-class Boston suburb where he resides and heads to the inner-city Boys and Girl Club, where he finds a former star fencer who now serves his home community. Through this mentorship and other new relationships, Donte discovers more about the gifts of his identity and the pride of cultural heritage. These lessons in self-discovery offer a deeply critical insight for young readers.

Placing biracial boyhood and the struggles of colorism at its center, the novel challenges readers to pursue their own self-definition. (Fiction. 8-12)