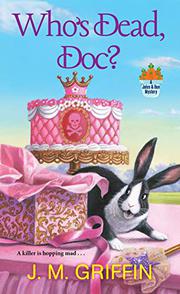 A bunny-loving farmer hopes that her telepathic connection to her pet rabbit can help her solve another murder.

Jules Bridge has dedicated her life to the care of rabbits. Not only does she own and operate Fur Bridge Farm, a venue dedicated to bunnies, but she has a number of rescue rabbits, an onsite vet, rabbit fur spinning classes, and even a few pet rabbits of her own. Sharing her love of the species is Jules’ calling, and it’s all in a day’s work when she celebrates young Adrian Richland’s birthday party with some rabbit show and tell. Jules is so focused on all things rabbit that it’s a shock to the system when the party erupts in human drama. Not only does Jules hear Adrian’s mother, Carina, arguing with guest Evelyn Montgomery, but later in the party, Evelyn is murdered, leaving Carina as the prime suspect. Carina approaches Jules about looking into who offed Evelyn, not only to save her own hide, but also because Jules has dipped her toe into investigating in the past (Left Fur Dead, 2019) and struck up a friendship with Sheriff Jack Carver to boot. Carina doesn’t know that Jules has a furry assistant who’s sure to make her investigation a success. Bun, the black-and-white rabbit who’s Jules’ favorite pet, communicates with her telepathically, and he quickly lets Jules know that he’s eager to help her dig into Evelyn’s murder. The investigation the duo launch into Evelyn’s dealings with a local rabbit show reveal that the dead woman was a mean, nasty person with too many enemies to count. Which candidates finally summoned the gall to end Evelyn’s life?

Rabbit-obsessed readers (hands, please? anyone?) will love the dedication to all things bunny. Others may find themselves out in the cold.

THE TIME FOR MURDER IS MEOW
by T.C. LoTempio
Newsletter sign-up