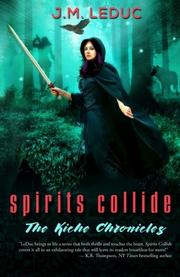 A teenage girl with a grand destiny fights to save her people from an army of demons.

Veteran author LeDuc (Evil Awakened, 2017, etc.) returns with the second entry in his Kiche Chronicles series. This vibrant follow-up finds 16-year-old Pamoon coming to terms with her new identity as the Kiche, or sky spirit goddess, who must defend her Cree tribe (and the rest of the world) from the ghost-witches and other terrifying creatures from the Netherworld who hope to gain control over the spirit realm. To do so, she must travel to the spirit world and discover how to harness the power of fire that burns within her while also learning how to wield the archangel Michael’s Sword of Truth. Fortunately, a band of wise tribal elders, devoted friends, and her loyal wolf, Scout, will be at her side during the coming battle. LeDuc plucks liberally from diverse traditions as he sketches his epic confrontation between good and evil. In addition to highlighting Native American beliefs (such as the story of the wendigo and the little people of Choctaw legend), the work provides references to Norse gods and Christian theology. It’s all a bit of a jumble, but it makes for a lively and entertaining story, especially with a strong heroine in a front-and-center role. Pamoon has matured since the first book in the series, but she still displays relatable moments of teenage angst, even as she grows into a warrior and leader. Especially touching is an encounter with her birth mother, which helps her come to terms with her past. Less successful is the romance between Pamoon and Ayas, an exiled “brave now more spirit than flesh with the supernatural ability to transform into wind.” Readers are meant to believe this pair shares a deep connection, but the bond comes off as more of an adolescent crush. Far more nuanced is Pamoon’s relationship with her friend Celia, who has her own role to play in the coming war.

An exciting, well-written supernatural thriller with a cliffhanger ending.