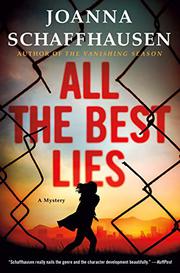 ALL THE BEST LIES

Desperate to solve the years-old case of his slain mother, an FBI agent digs into Vegas dirt alongside a woman with whom he has a complex relationship.

Mail-in DNA tests upend the world of Reed Markham, who’s spent his whole life thinking he was adopted only to learn that his adoptive father, Angus, is also his biological father. A lesser man would just sit with the news, but Reed’s an FBI agent with the will and the means to learn more, particularly about the murder of his birth mother, Camilla Flores. Cammie was a Puerto Rican immigrant working hard to make ends meet in 1970s Las Vegas when she was viciously attacked and stabbed to death as her 4-month-old baby slept in another room. Though her murder has never been solved, police wisdom seems to think that it was the work of a local drug dealer Cammie was prepared to testify against. But Reed’s investigative know-how tells him the crime was more personal, and now that he knows the truth about Angus, Reed needs to learn whether his father was involved in Cammie’s death. Ably assisting Reed is Ellery Hathaway, the one person (unlike his ex-wife, Sarit) who won’t judge his quest. Reed and Ellery’s complicated relationship began when she was a child and he was the agent who rescued her from the clutches of a serial killer. Now that she’s become a cop, Ellery’s shared with Reed trauma histories, investigative skills, and poor boundaries as they’ve solved several cases on and off the books, even as their relationship has veered toward romance—though their history makes this turn something Schaffhausen (No Mercy, 2019, etc.) can’t quite pull off. Now that he’s in Vegas to learn the truth about his mother, Reed also wants to figure out what he and Ellery have together.

NO MERCY
by Joanna Schaffhausen
Mystery

THE VANISHING SEASON
by Joanna Schaffhausen

WHAT DOESN'T KILL HER
by Carla Norton
Mystery

ALL THE SECRET PLACES
by Anna Carlisle
Mystery